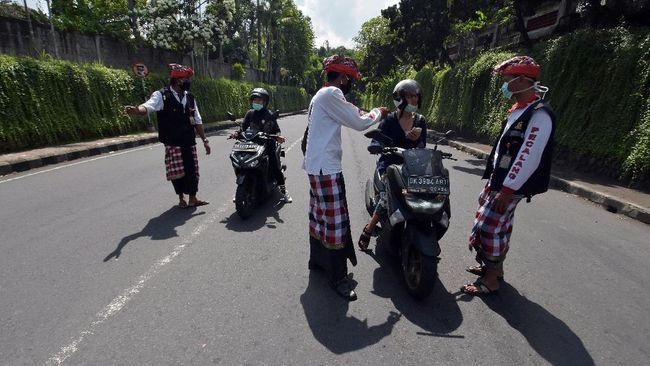 Insisting against implementing large-scale social restrictions (PSBB) to slow the spread of COVID-19 across the resort island, the Bali administration has been relying on local customs called “Pecalang” to fight the ongoing outbreak.

Bali Governor I Wayan Koster claimed the island had been successful in curbing the disease because residents had strong ties to the local values and culture. He also acknowledged the role of 1,493 traditional villages across the island in preventing outsiders from entering their respective areas, thus preventing them from contracting the novel coronavirus.

Constitution of the Republic of Indonesia 1945 on Regional Government, especially in Article 18 and paragraph (2) states that “the state recognizes and respects units of customary law communities along with their traditional rights as long as they still live, and in accordance with the development of society and the principles of the Republic of Indonesia, which is regulated by law “.

In response to these provisions, the Bali provincial government released Regional Law 3 of 2003 on Pakraman and Customs Agency by sticking to the philosophy of “Tri Hita Karana”. In maintaining security and public order Pakraman in Bali, a task force was formed traditionally called “pecalang”, which means “celang” (the sharpness of the senses). Pecalang becomes one device of Pakraman, due to the formation through village Paruman (meeting) based on the teachings of Hinduism. Not all citizens can be pecalang of Pakraman, but the election is carried out by village prajuru based on Paruman stated in the villages “awig awig” (law).

Therefore, based on the concept of “ngayah” (not paid), a pecalang in any activities is related to customs, religion, and other activities with national and international scope, are required to participate in maintaining security and order of Pakraman, the area where pecalang domiciled. Especially on Nyepi, pecalang in maintaining security and order in each Pakraman both the physical environment, socio-cultural environment, including the behavior of the villagers, still do a good cooperation with the police of state and the entire community in Pakraman with coordination on any activities carried out.

Nevertheless, all three security forces work together to provide security. Hansip and pecalang are not modern phenomena created for tourism; rather, Bali had hansip and pecalang security forces hundreds of years before the advent of modern tourism. These forces traditionally reported to one of the royal families of the historic Bali Kingdoms, also considered their eyes and ears. Pecalang can be identified by their traditional and distinctive attire.

Every village in Bali has pecalang. The traditional guards maintain village security and manage traffic flow during religious and customary ceremonies. Pecalang have had an important role in Bali for hundreds of years. Pecalang were created to maintain the security of the village and in practice, they work hand in hand with hansip (security officers of the administrative village). In true Balinese fashion the costumes worn by the pecalang demonstrate a harmony of symbolism, in terms of design and accessories.

Usually the costumes consist of a chessboard-like sarong, white shirt, black waistcoat and headband completed with keris (dagger) affixed on the back. The checked motif represents the opposition of good and evil represented by white and black, the combination of which balances out into equilibrium. These sarongs can be seen in ceremonies and on statues throughout Bali. The positioning of the keris dagger represents the pecalang’s approach to peace keeping, which is passive rather than aggressive.

Despite being hundreds of years old, pecalang still play an important role among Balinese society. The job of pecalang is to secure activities related to Balinese customs, such as temple ceremonies, Gabon processions, wedding-processions. Pecalang are usually chosen by the village heads and given an assignment.

At Tanah Lot, pecalang are present to ensure security of the many visiting tourists. When it comes to big events, Bali has its own traditions of safeguarding events, with local authorities involving traditional Balinese security personnel. Major events in which pecalang plays an important role are the Bali Arts Festival, Nyepi (Day of Silence) and the International Kite Festival. When no major events are taking place, however, the pecalang settle back into more peaceful but equally useful roles such as controlling traffic.

All security roles are carried out in conjunction with the police department, demonstrating their vertical and horizontal cooperation to keep Bali safe, as their ancestors have done. As coronavirus is also becoming major in Bali, the government of Bali decided to make pecalang as one of the warrior to prevent the disease spreading in Bali. Pecalang usually play their role in desa adat part in Bali.

Bali security officers pecalang is becoming one of important part in preventing the spread of coronavirus in Bali. Pecalang do a lot of things to make the Balinese citizen obey the rule that government of Bali create to prevent the spread of the disease including giving the punishment for the citizen for not using a mask Example in Sanur, Denpasar they have been forcing people caught without wearing face masks to do push-ups in the street amid the COVID-19 pandemic.  The local security officers, known as Pecalang, have recently started enforcing the push-up punishment in the traditional village of Intaran in Sanur, east of Denpasar city.

The security officers were raising awareness for new local laws that were coming into effect since Friday, May 1.  From Friday, those caught entering the village without a face mask will be fined five kilograms of rice (68 Australian cents) and made to do community service.  The community service lasts three days and involves clearing palms from the Intaran village and traditional markets. Intaran village chief I Gusti Agung Alit Kencana said violators will be tried by the neighborhood and a youth organization known as Sekaa Teruna.  ‘We must be firm now, if we are not firm it will be difficult to regulate. We also coordinate with the government for regulating outsiders such as tourists,’ he told. He said the laws do not apply to tourists, which is why they have to coordinate with the government.  Pecalang officers report to the village chief and are a traditional security force separate from the police who are responsible for general safety and traffic control. They wear traditional Indonesian clothes, including a sarong and cloth hat.

Bali Governor I Wayan Koster claimed the island had been successful in curbing the disease because residents had strong ties to the local values and culture. He also acknowledged the role of 1,493 traditional villages across the island in preventing outsiders from entering their respective areas, thus preventing them from contracting the novel coronavirus.  “Our residents are more disciplined thanks to their local customs, which they strictly obey. Traditional villages also have their own ancestral customs for rituals that can be enforced amid the outbreak,” Koster said.

He added that the provincial administration had initiated several measures to prevent the outbreak from worsening across Bali, including preparing health facilities. “We have been following COVID-19 management procedures since the first case was recorded in our region on March 10,” the governor said. The island has 13 COVID-19 referral hospitals with 392 beds and equipped with isolation wards and skilled medical workers.

The administration will continue to improve healthcare measures across the island by, among other efforts, providing swab tests using the polymerase chain reaction (PCR) method in several hospitals and medical facilities, Koster went on to say. Pecalang will always needed to make the Balinese citizen obey by the government rules. Sometimes, the punishment from pecalang in Bali feel more ashamed compare when it comes from the police for Balinese Citizen.

This is not coming from out of reason, as we know that the culture in Bali is very strict for their own citizen. This make the punishment that coming from pecalang seems heavier compare to the actual law. We hope that pecalang can give the significant effect in reducing the case of coronavirus in Bali. So we can end this pandemic together soon and make our planet back healthy again.

How to Recognize Severe Dehydration and What to Do

Stages Of Wound Healing & What To Expects

The 8 Most Common Food Allergies

Why Does My Ear Feel Clogged?